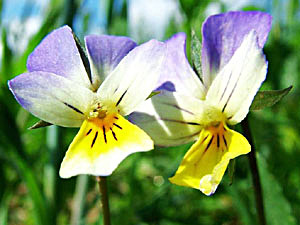 Medicinal use of Heartsease:

Heartsease has a long history of herbal use and was at one time in high repute as a treatment for epilepsy, asthma, skin diseases and a wide range of other complaints. In modern herbalism it is seen as a purifying herb and is taken internally in the treatment of skin complaints such as eczema. The herb is anodyne, antiasthmatic, anti-inflammatory, cardiac, demulcent, depurative, diaphoretic, diuretic, emollient, expectorant, laxative and vulnerary. Being expectorant, it is used in the treatment of various chest complaints such as bronchitis and whooping cough, whilst its diuretic action makes it useful for treating rheumatism, cystitis and difficulty in passing urine. It is also used as an ointment for treating eczema and other skin complaints and is also useful in cases of rheumatism, bed-wetting etc. The plant is harvested from June to August and dried for later use. The root is emetic. A homeopathic remedy is made from the entire plant. It is used in the treatment of cutaneous eruptions.

Young leaves and flower buds - raw or cooked. When added to soup they thicken it in much the same way as okra. A tea can be made from the leaves. The small attractive flowers are added to salads or used as a garnish.

Yellow, green and blue-green dyes are obtained from the flowers. The leaves can be used in place of litmus in testing for acids and alkalis.

Seed - best sown in the autumn in a cold frame. Division in the autumn or just after flowering. The plant is a short-lived perennial and division is not that worthwhile.