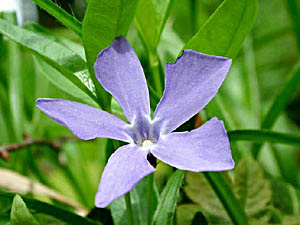 Medicinal use of Lesser Periwinkle:

The plant is sedative and tonic. It contains the alkaloid "vincamine", which is used by the pharmaceutical industry as a cerebral stimulant and vasodilator. Since the discovery of vincamine in the leaves, the plant has been used herbally to treat arteriosclerosis and for dementia due to insufficient blood supply to the brain. The leaves are bitter, detergent and stomachic. Taken internally, they are used in the treatment of internal bleeding, heavy menstrual bleeding and nosebleeds. When crushed and applied to wounds they have astringent and healing properties. A mouthwash is used to treat gingivitis, sore throats and mouth ulcers. The leaves are gathered in the spring and dried for later use. The root is antispasmodic and hypotensive. It is used to lower the blood pressure. The root is gathered in the autumn and dried for later use. The fresh flowers are gently purgative, but lose their effect on drying. A homeopathic remedy is made from the fresh leaves. It is used in the treatment of haemorrhages.

Other uses of Lesser Periwinkle:

The stems are used in basket making. A very good ground cover for covering steep banks and shady places, spreading rapidly once established and forming a dense cover within 2 years. It is less dense on dry or exposed sites. Plants are best spaced about 60cm apart each way.

Seed - we have no information on this species but suggest sowing the seed in a cold frame as soon as it is ripe if possible. Sow stored seed in late winter in a cold frame. When they are large enough to handle, prick the seedlings out into individual pots and grow them on in the greenhouse for their first winter. Plant them out into their permanent positions in late spring or early summer, after the last expected frosts. Division in spring just before active growth commences, or in autumn. Larger divisions can be planted out direct into their permanent positions. We have found that it is best to pot up smaller divisions and grow them on in light shade in a greenhouse or cold frame until they are growing away well. Plant them out in the summer or the following spring. Cuttings of mature wood of the current seasons growth, 5 - 10 cm long, October in a cold frame. Roots quickly. High percentage.

Large quantities of the plant are poisonous.