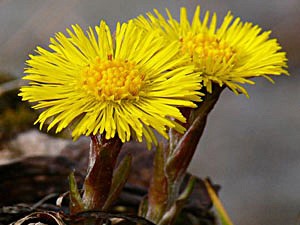 Medicinal use of Coltsfoot:

An effective demulcent and expectorant herb, coltsfoot is one of the most popular European remedies for the treatment of a wide range of chest complaints. It is widely available in health food shops. The leaves are commonly used in Europe, though the flowering stems (which contain higher levels of pyrrolizidine alkaloids) are preferred in China. They are rich in mucilage and are the main parts used, though the root is also sometimes employed. Pyrrolizidine alkaloids have a toxic effect upon the liver, but are largely destroyed when the plant is boiled to make a decoction. Some caution should be employed in the use of this remedy - the flowers should not be used except under professional supervision, the leaves should not be used for more than 4 - 6 weeks at a time, the herb should not be taken whilst pregnant or breast-feeding and it should not be given to children under the age of six. Modern research has shown that extracts of the whole plant can increase immune resistance. In a Chinese trial 75% of patients suffering from bronchial asthma showed some improvement after treatment with this plant, though the anti-asthmatic effect was short-lived. The leaves are harvested in June and early July, the flowers are harvested when fully open and the root is harvested in the autumn. All can be dried and used as required. The plant is antitussive, astringent, demulcent, emollient, expectorant, stimulant and tonic. It is widely used in the treatment of coughs and respiratory problems and is often candied so that it can be sucked as a sweet. The plant is of particular use in the treatment of chronic emphysema and silicosis, helping to relieve the persistent cough associated with these conditions. Coltsfoot is particularly effective when used in combination with liquorice (Glycyrrhiza species), thyme (Thymus vulgaris) and wild cherry (Prunus serotina). A poultice of the flowers has a soothing effect on a range of skin disorders including eczema, ulcers, sores, bites and inflammations. A bitter, tonic and diaphoretic preparation can be obtained from the root.

Damp habitats, frequently on alkaline clays, in hedgebanks, roadsides, wasteland, often as a pioneer, and on dunes and shingle in coastal zones.

Flower buds and young flowers - raw or cooked. A pleasant aniseed flavour, they add a distinctive aromatic flavour to salads. Young leaves - raw or cooked. They can be used in salads, added to soups, or cooked as a vegetable. The leaves have a bitter taste unless they are washed after being boiled. An aromatic tea is made from the fresh or dried leaves and flowers. It has a liquorice-like flavour. The dried and burnt leaves are used as a salt substitute. The slender rootstock is candied in sugar syrup.

The soft down on the underside of the leaves is used as a stuffing material. When wrapped in a rag, dipped in saltpetre and dried in the sun it makes an excellent tinder. Plants have an extensive root system and are used to stabilize banks. The leaves are a valuable addition to the compost heap.

Seed - the plant does not usually require help with spreading itself around, but if required the seed can be sown in situ in early spring or autumn. Division of the roots is very easy and succeeds at almost any time in the year. The divisions can be planted out direct into their permanent positions.

Damp habitats, frequently on alkaline clays, in hedgebanks, roadsides, wasteland, often as a pioneer, and on dunes and shingle in coastal zones.

The plant contains traces of liver-affecting pyrrolizidine alkaloids and is potentially toxic in large doses. These alkaloids have not proved toxic at low dosages in tests and there is no suggestion that this plant should not be used medicinally.