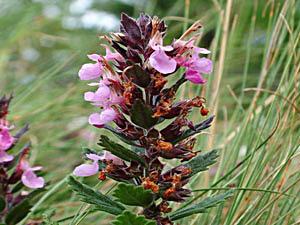 Medicinal use of Wall Germander:

Wall germander is a specific for the treatment of gout, it is also used for its diuretic properties, and as a treatment for weak stomachs and lack of appetite. It has also been taken as an aid to weight loss and is a common ingredient in tonic wines. Some caution is advised when using this plant internally, it can cause liver damage The whole herb is anti-inflammatory, antirheumatic, aperient, aromatic, astringent, bitter, carminative, diaphoretic, digestive, diuretic, stimulant and tonic. It is harvested in the summer and can be dried for later use. It is used externally as an astringent infusion on the gums and also in the treatment of wounds.

Sunny, rather dry places on waste ground and rocky outcrops, mainly on limestone soils Naturalized on old walls in Britain.

The plant is widely used in making alcoholic drinks with a bitter base, which have digestive or appetite-promoting qualities.

Amenable to light trimming so can be grown as a low edging border in the garden. Any trimming is best done in the spring. The plant contains 0.6% of an essential oil. Plants can be grown as a ground cover when planted about 30cm apart each way.

Seed - sow spring in a cold frame and only just cover the seed. Prick out the seedlings into individual pots when they are large enough to handle and plant them out in the summer if they are large enough. Otherwise, grow them on in a cold frame for the winter and plant them out in the following spring. Division in early spring. Larger divisions can be planted out direct into their permanent positions. We have found that it is best to pot up smaller divisions and grow them on in light shade in a greenhouse or cold frame until they are growing away well. Plant them out in the summer or the following spring. Cuttings of half-ripe wood, July/August in a frame.

Sunny, rather dry places on waste ground and rocky outcrops, mainly on limestone soils Naturalized on old walls in Britain.