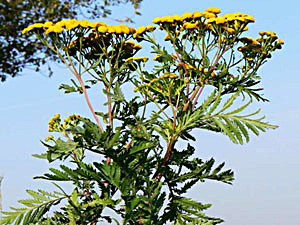 Medicinal use of Tansy:

Tansy is a commonly grown domestic remedy, useful in treating a wide range of complaints, though it is little used in modern herbalism. Its main value is as a vermifuge to expel intestinal worms and, to a lesser degree, to help stimulate menstrual bleeding. Tansy should be used with caution, however, it is possibly unsafe for internal use, especially if you are pregnant. The essential oil in the leaves is toxic and as little as ?oz can kill an adult. The leaves and flowering tops are anthelmintic, antispasmodic, bitter, carminative, emmenagogue, stimulant and tonic. An infusion of the leaves or whole plant is used to treat menstrual irregularities and as an anthelmintic, especially for children. It is also valuable in treating hysteria, kidney weaknesses, stomach problems, fevers and also as an emmenagogue. In larger doses the plant can procure an abortion, though these doses can be poisonous. Externally, tansy is used as a poultice on swellings and some eruptive skin diseases. It is also used externally to kill lice, fleas and scabies, though even external use of the plant carries the risk of toxicity. The plant is harvested as it is coming into flower and is dried for later use. The seeds are used as an anthelmintic.

Young leaflets - raw or cooked. They can be added in small quantities to salads. The plant is also used as a flavouring, it is a substitute for nutmeg and cinnamon. This plant is not recommended for internal use. The flowers have a unique flavour and are eaten or used as a garnish. A bitter, somewhat lemon-flavoured tea is made from the leaves and flowering stems.

A green dye is obtained from the young shoots. The leaves and flowers can also be used and a yellow can also be obtained. The plant is used as a strewing herb in cellars, churches etc in order to repel insects. Both the growing and the dried plant are said to repel flies, ants and fleas, especially if they are mixed with elder leaves (Sambucus spp.). The leaves and the flowering shoots contain 0.15% of an essential oil that contains camphor, borneol and thujone. Both the leaves and the oil and they have been used to kill fleas and lice. Thujone is an effective insecticide, but it is highly toxic to mammals when taken in excess. The plant is a good addition to the compost heap, being valued for its mineral content.

Seed - sow spring in a greenhouse. Only just cover the seed and do not allow the pot to dry out. Prick out the seedlings into individual pots once they are large enough to handle and plant out in the summer. Division is very simple at almost any time in the growing season, though spring is probably best. Larger divisions can be planted out direct into their permanent positions. We have found that it is best to pot up smaller divisions and grow them on in light shade in a greenhouse or cold frame until they are growing away well. Plant them out in the summer or the following spring.

The plant is poisonous if large quantities are ingested. There have been cases of death in N. America from drinking strong brews of the tea, presumably as an abortifacient.