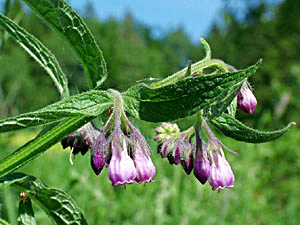 Medicinal use of Comfrey:

Comfrey is a commonly used herbal medicine with a long and proven history in the treatment of various complaints. The root and the leaves are used, the root being more active, and they can be taken internally or used externally as a poultice. Comfrey is especially useful in the external treatment of cuts, bruises, sprains, sores, eczema, varicose veins, broken bones etc, internally it is used in the treatment of a wide range of pulmonary complaints, internal bleeding etc. The plant contains a substance called "allantoin", a cell proliferant that speeds up the healing process. This substance is now synthesized in the pharmaceutical industry and used in healing creams. The root and leaves are anodyne, astringent (mild), demulcent, emollient, expectorant, haemostatic, refrigerant, vulnerary. Some caution is advised, however, especially in the internal use of the herb. External applications and internally taken teas or tinctures of the leaves are considered to be completely safe, but internal applications of tablets or capsules are felt to have too many drawbacks for safe usage. See also the notes above on toxicity. The leaves are harvested in early summer before the plant flowers, the roots are harvested in the autumn. Both are dried for later use. A homeopathic remedy is made from the fresh root, harvested before the plant flowers. This has a very limited range of application, but is of great benefit in the treatment of broken bones and eye injuries.

Young leaves - cooked or raw. The leaf is hairy and the texture is mucilaginous. It may be full of minerals but it is not pleasant eating for most tastes. It can be chopped up finely and added to salads, in this way the hairiness is not so obvious. Young shoots can be used as an asparagus substitute. The blanched stalks are used. Older leaves can be dried and used as a tea. The peeled roots are cut up and added to soups. A tea is made from the dried leaves and roots. The roasted roots are used with dandelion and chicory roots for making coffee.

The plant grows very quickly, producing a lot of bulk. It is tolerant of being cut several times a year and can be used to provide "instant compost" for crops such as potatoes. Simply layer the wilted leaves at the bottom of the potato trench or apply them as a mulch in no-dig gardens. A liquid feed can be obtained by soaking the leaves in a small amount of water for a week, excellent for potassium demanding crops such as tomatoes. The leaves are also a very valuable addition to the compost heap. A gum obtained from the roots was at one time used in the treatment of wool before it was spun.

Seed - sow spring or autumn in a cold frame. When they are large enough to handle, prick the seedlings out into individual pots and grow them on in the greenhouse for their first winter. Plant them out into their permanent positions in late spring or early summer, after the last expected frosts. If you have sufficient seed you can try an outdoor sowing in situ in the spring. Division succeeds at almost any time of the year. Simply use a spade to chop off the top 7cm of root just below the soil level. The original root will regrow and you will have a number of root tops, each of which will make a new plant. These can either be potted up or planted out straight into their permanent positions.

This plant contains small quantities of a toxic alkaloid which can have a cumulative effect upon the liver. Largest concentrations are found in the roots, leaves contain higher quantities of the alkaloid as they grow older and young leaves contain almost none. Most people would have to consume very large quantities of the plant in order to do any harm, though anyone with liver problems should obviously be more cautious. In general, the health-promoting properties of the plant probably far outweigh any possible disbenefits, especially if only the younger leaves are used.