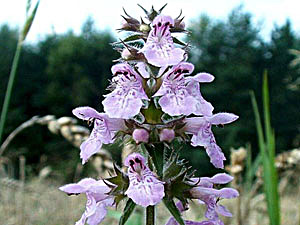 Medicinal use of Marsh Woundwort:

The plant is antiseptic, antispasmodic, emetic, emmenagogue, expectorant, haemostatic, nervine, sedative, tonic, vulnerary. The plant has been highly valued for its wound-healing activity, being effective against both internal and external bleeding, and is also used in the treatment of gout, cramps and pains in the joints. The herb is harvested in the summer when just coming into flower and can be dried for later use.

By streams and ditches, also in swamps and fens. Occasionally found on arable land.

Tubers - raw or cooked. A wholesome and nutritious food, they have a pleasant mild nutty flavour. The tubers can be dried and ground into a powder that is used in making bread etc. The tubers are formed in the autumn. Although quite small, they are fairly smooth and produced in a reasonable quantity so are not too fiddly to utilize. Young shoots - cooked. Used as an asparagus substitute. A pleasant taste but the smell is disagreeable. Seed. No further details are given.

A yellow dye is obtained from the plant.

Seed - sow spring in a cold frame. Prick out the seedlings into individual pots once they are large enough to handle and plant them out in the summer. Division in spring. Larger divisions can be planted out direct into their permanent positions. We have found it best to pot up the smaller divisions and grow them on in a lightly shaded position in a cold frame, planting them out once they are well established in the summer.

By streams and ditches, also in swamps and fens. Occasionally found on arable land.