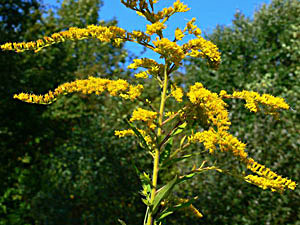 Medicinal use of Canadian Goldenrod:

Haemostatic, styptic. The root is applied as a poultice to burns. An infusion of the dried powdered herb can be used as an antiseptic. The blossoms are analgesic, astringent and febrifuge. They have been chewed and the juice slowly swallowed to treat sore throats. A tea made from the flowers is used in the treatment of diarrhoea, body pains, fevers and snakebites. The plant contains quercitin, a compound that is reportedly useful in the treatment of haemorrhagic nephritis. This plant is said to have similar medicinal properties to S. virgaurea. These are:- Goldenrod is a safe and gentle remedy for a number of disorders. In particular, it is a valuable astringent remedy treating wounds and bleeding, whilst it is particularly useful in the treatment of urinary tract disorders, being used both for serious ailments such as nephritis and for more common problems such as cystitis. The plant contains saponins that are antifungal and act specifically against the Candida fungus which is the cause of vaginal and oral thrush. It also contains rutin which is used to treat capillary fragility, and phenolic glycosides which are anti-inflammatory. The leaves and flowering tops are anthelmintic, anti-inflammatory, antiseptic, aromatic, astringent, carminative, diaphoretic, mildly diuretic, febrifuge and stimulant. A good vulnerary herb, it has also proved of value when used internally in the treatment of urinary infections, chronic catarrh, skin diseases, influenza, whooping cough, bladder and kidney stones etc. Due to its mild action, goldenrod is used to treat gastro-enteritis in children. It makes an excellent mouthwash in the treatment of thrush. The plant is gathered in the summer and dried for later use. The seed is anticoagulant, astringent and carminative. A homeopathic remedy is made from the plant. It is used in the treatment of kidney and bladder disorders, rheumatism and arthritis.

Young leaves and flowering stems - cooked. Seed. Used as a thickener in soups. The seed is very small and is only used as a survival food when all else fails. A tea can be made from the flowers and/or the leaves.

Mustard, orange and brown dyes can be obtained from the whole plant. The source of "Canadian goldenrod" oil. We have no further details, but it is likely to be an essential oil.

Seed - sow spring in a cold frame. Only just cover the seed and do not allow the compost to become dry. Prick out the seedlings into individual pots when they are large enough to handle, and grow them on for their first winter in pots. Plant them out into their permanent positions in spring or early summer. Division in spring or autumn. Larger divisions can be planted out direct into their permanent positions. We have found it best to pot up the smaller divisions and grow them on in a lightly shaded position in a cold frame, planting them out once they are well established in the summer.