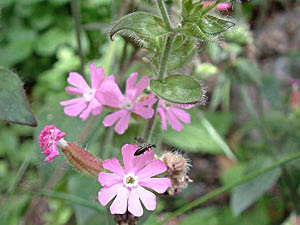 Woods, hedgerows and ledges of cliffs, usually on limestone.

The root is used as a soap substitute for washing clothes etc. The soap is obtained by simmering the root in hot water.

Seed - sow early spring in a cold frame. When they are large enough to handle, prick the seedlings out into individual pots and plant them out in the summer. If you have sufficient seed it can be sown outdoors in situ during the spring. Division in spring. Larger divisions can be planted out direct into their permanent positions. We have found it best to pot up the smaller divisions and grow them on in a lightly shaded position in a cold frame, planting them out once they are well established in the summer.

Woods, hedgerows and ledges of cliffs, usually on limestone.

Medicinal use of Red Campion:

Although no mention of toxicity has been seen for this species, it does contain saponins. Although toxic, these substances are very poorly absorbed by the body and so tend to pass through without causing harm. They are also broken down by thorough cooking. Saponins are found in many plants, including several that are often used for food, such as certain beans. It is advisable not to eat large quantities of food that contain saponins. Saponins are much more toxic to some creatures, such as fish, and hunting tribes have traditionally put large quantities of them in streams, lakes etc in order to stupefy or kill the fish.