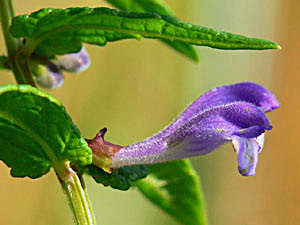 Medicinal use of Common Skullcap:

The herb is anti-inflammatory, antispasmodic, slightly astringent, febrifuge, nervine and strongly tonic. In the home an infusion is sometimes used in the treatment of throat infections. The plant is harvested in the summer as it comes into flower and can be dried for later use. This plant is rarely if ever used in herbal medicine, though it is said to have the same applications as S. lateriflora. These applications are:- Skullcap was traditionally used in the treatment of a wide range of nervous conditions including epilepsy, insomnia, anxiety, delirium tremens, withdrawal from barbiturates and tranquillisers, and neuralgia. An infusion of the plant has been used to promote suppressed menstruation, it should not be given to pregnant women since it can induce a miscarriage. This plant should be used with some caution since in excess it causes giddiness, stupor, confusion and twitching.

Moist acid or calcareous soils on the edges of streams, in water meadows and fens, ascending to 360 metres in Britain.

Seed - sow in situ outdoors in late spring. If there is only a small quantity of seed it is better to sow it in a pot in a cold frame in early spring. When they are large enough to handle, prick the seedlings out into individual pots and plant them out in the spring. Division in spring just before new growth begins. Very easy, larger divisions can be planted out direct into their permanent positions. We have found it best to pot up the smaller divisions and grow them on in a lightly shaded position in a cold frame, planting them out once they are well established in the summer. Basal cuttings in early summer in a frame. Very easy. Harvest the shoots with plenty of underground stem when they are about 8 - 10cm above the ground. Pot them up into individual pots and keep them in light shade in a cold frame or greenhouse until they are rooting well. Plant them out in the summer.

Moist acid or calcareous soils on the edges of streams, in water meadows and fens, ascending to 360 metres in Britain.