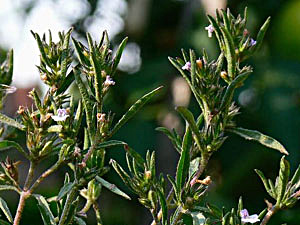 Medicinal use of Summer Savory:

Summer savory is most often used as a culinary herb, but it also has marked medicinal benefits, especially upon the whole digestive system. The plant has a milder action than the closely related winter savory, S. montana. The whole herb, and especially the flowering shoots, is antiseptic, aromatic, carminative, digestive, expectorant and stomachic. Taken internally, it is said to be a sovereign remedy for colic and a cure for flatulence, whilst it is also used to treat nausea, diarrhoea, bronchial congestion, sore throat and menstrual disorders. It should not be prescribed for pregnant women. A sprig of the plant, rubbed onto bee or wasp stings, brings instant relief. The plant is harvested in the summer when in flower and can be used fresh or dried. The essential oil forms an ingredient in lotions for the scalp in cases of incipient baldness. An ointment made from the plant is used externally to relieve arthritic joints.

Leaves - raw or cooked. An aromatic, slightly peppery flavour, they are used mainly as a flavouring for cooked foods, especially the more difficult to digest foods such as beans where they compliment the flavour and reduce flatulence. They are also used as a garnish for salads etc. The leaves can be used fresh or dried. A herb tea is made from the leaves. The leaves are harvested just before the plant comes into flower. A tangy, marjoram-like flavour. The flowering shoots contain about 0.5% essential oil, this is used as a food flavouring.

The essential oil from the flowering shoots is used extensively in perfumery, giving a particular quality to the fragrance. When grown near beans it repels insect pests.

Seed - sow April in situ and only just cover. Germinates in about 2 weeks. The plant strongly resents root disturbance so do not transplant it. In areas with mild winters an autumn sowing will provide an earlier supply of leaves.