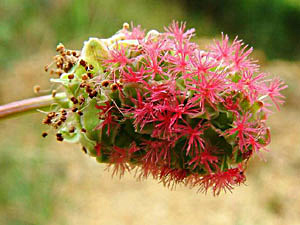 Medicinal use of Salad Burnet:

Both the root and the leaves are astringent, diaphoretic and styptic, though the root is most active. The plant is an effective wound herb, quickly staunching any bleeding. An infusion is used in the treatment of gout and rheumatism. The leaves can be used fresh, or are harvested in July and dried (the plant should be prevented from flowering). The root is harvested in the autumn and dried. An infusion of the leaves is used as a soothing treatment for sunburn or skin troubles such as eczema.

Young leaves and shoots - raw or cooked. They are best used before the plant comes into flower. Eaten in salads, used as a garnish or added to soups, cooling drinks and claret cups. Young seedlings are boiled and eaten. A bit fiddly to harvest and the leaves sometimes become bitter in hot dry summers, but they are usually fairly mild tasting in the winter and some people detect a cucumber flavour to them. In the acid soil of our Cornish trial grounds, the leaves have a distinctly bitter flavour, though when the same plants were grown on a chalky soil they had a much milder flavour. The leaves contain about 5.65% protein, 1.2% fat, 11% carbohydrate, 1.7% ash, 74.5% water. A herb tea is made from the dried leaves.

Plants have extensive root systems and are used for erosion control, they are also used to reclaim landfills and mined-out terrain.

Seed - sow March/April or September/October in a cold frame. Germinates in 3 weeks. Prick out the seedlings when they are large enough to handle into individual pots. Plant them out in the spring or early summer. The seed can also be sown in situ in spring or autumn if you have sufficient seed. Division in spring.