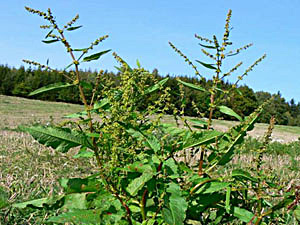 Medicinal use of Round-Leaved Dock:

The leaves are often applied externally as a rustic remedy in the treatment of blisters, burns and scalds. The root contains tannin and is astringent and blood purifier. A tea made from the roots has been used in the treatment of jaundice, whooping cough, boils and bleeding. An infusion of the root has been used as a wash, especially for children, to treat skin eruptions. One report says that the root has been used as a contraceptive to stop menstruation. The root is harvested in early spring and dried for later use.

Young leaves - cooked. A bitter taste, especially if the older leaves are used. The leaves are usually cooked in at least one change of water in order to reduce the bitterness. Leaves can also be dried for later use. The leaves have a much milder flavour when they are first produced in early spring. Young stems - cooked. Seed - raw or cooked. The seed can also be ground into a powder and used to make a gruel or added to cereal flours when making bread etc. It is rather small and fiddly to harvest.

Yellow, dark green to brown and dark grey dyes can be obtained from the roots of this plant. They do not need a mordant.

Plants can contain quite high levels of oxalic acid, which is what gives the leaves of many members of this genus an acid-lemon flavour. Perfectly alright in small quantities, the leaves should not be eaten in large amounts since the oxalic acid can lock-up other nutrients in the food, especially calcium, thus causing mineral deficiencies. The oxalic acid content will be reduced if the plant is cooked. People with a tendency to rheumatism, arthritis, gout, kidney stones or hyperacidity should take especial caution if including this plant in their diet since it can aggravate their condition.