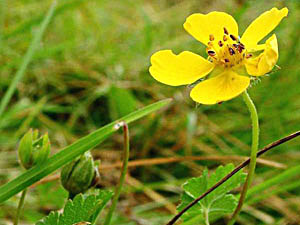 Medicinal use of Cinquefoil:

Both the roots and the herb are antispasmodic, astringent and febrifuge. An infusion of the dried herb is used in the treatment of diarrhoea etc, it is also used as a gargle for sore throats and is used externally as an astringent lotion. A concentrated decoction of the root relieves toothache.

The plant is an ingredient in many anti-wrinkle cosmetic preparations for the skin.

Seed - sow early spring or autumn in a cold frame. When they are large enough to handle, prick the seedlings out into individual pots and grow them on in the greenhouse for their first winter. Plant them out into their permanent positions in late spring or early summer, after the last expected frosts. Division in spring or autumn. Larger divisions can be planted out direct into their permanent positions. We have found that it is better to pot up the smaller divisions and grow them on in light shade in a cold frame until they are well established before planting them out in late spring or early summer.