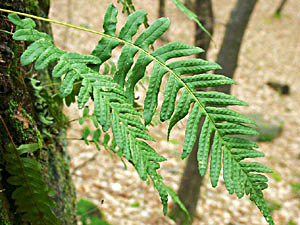 Medicinal use of Polypody:

Polypody stimulates bile secretion and is a gentle laxative. In European herbal medicine it is traditionally used as a treatment for hepatitis and jaundice and as a remedy for indigestion and loss of appetite. It should not be used externally since it can cause skin rashes. The root is alterative, anthelmintic, cholagogue, demulcent, diuretic, expectorant, pectoral, purgative, tonic. It can be used either fresh or dried and is best harvested in October or November, though it can be collected until February. The leaves can also be used but are less active. A tea made from the roots is used in the treatment of pleurisy, hives, sore throats and stomach aches and as a mild laxative for children. It was also considered of value for lung ailments and liver diseases. The poulticed root is applied to inflammations. A tea or syrup of the whole plant is anthelmintic.

Rocks, walls and trees, as well as on the ground, in a variety of habitats but especially in humid shady conditions.

Root. Very sweet, it contains sugars, tannin and oils. It is used as a liquorice adulterant. The root has a unique, rather unpleasant odour and a sweet (cloying) flavour at first though it quickly becomes nauseating. The root contains 15.5% saccharose and 4.2% glucose.

Plants can be grown as a ground cover in a shady position. They form a spreading carpet and are best spaced about 30cm apart each way. The ash of burnt leaves is rich in carbonate of potash.

Spores - best sown as soon as they are ripe, though they can also be sown in the spring. Sow them on the surface of a humus-rich sterilized soil. Keep the compost moist, preferably by putting a plastic bag over the pot. Pot on small clumps of plantlets as soon as they are large enough to handle and keep humid until they are well established. Do not plant outside until the ferns are at least 2 years old and then only in a very well sheltered position. Division. This is best done in the spring but it succeeds at most times of the year.

Rocks, walls and trees, as well as on the ground, in a variety of habitats but especially in humid shady conditions.

Although we have found no reports of toxicity for this species, a number of ferns contain carcinogens so some caution is advisable. Many ferns also contain thiaminase, an enzyme that robs the body of its vitamin B complex. In small quantities this enzyme will do no harm to people eating an adequate diet that is rich in vitamin B, though large quantities can cause severe health problems. The enzyme is destroyed by heat or thorough drying, so cooking the plant will remove the thiaminase.