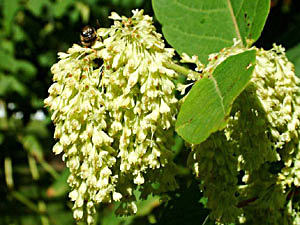 Young shoots in spring - raw or cooked. They can be added to salads or cooked as an asparagus substitute. They have an acid flavour and we find that they are more like a rhubarb substitute. Older stems and shoot tips - cooked. The stems are best peeled. Tasting like a mild version of rhubarb, they have a superior quality with a hint of lemon in the flavour. Seed - cooked. The seed can be ground into a powder and used as a thickener and flavouring in soups etc, or as an extender in flour. It is rather small and fiddly to utilize.

Along ravines and by streams in montane areas of Sakhalin Island.

Other uses of Giant Knotweed:

A potential source of biomass. Plants are very vigorous and could be grown as a ground cover.

Seed - sow spring in a cold frame. Germination is usually free and easy. When they are large enough to handle, prick the seedlings out into individual pots and plant them out in the summer if they have reached sufficient size. If not, overwinter them in a cold frame and plant them out the following spring after the last expected frosts. Division in spring or autumn. Very easy, larger divisions can be planted out direct into their permanent positions. We have found that it is better to pot up the smaller divisions and grow them on in light shade in a cold frame until they are well established before planting them out in late spring or early summer.

Along ravines and by streams in montane areas of Sakhalin Island.

Medicinal use of the herb:

Although no specific mention has been made for this species, there have been reports that some members of this genus can cause photosensitivity in susceptible people. Many species also contain oxalic acid (the distinctive lemony flavour of sorrel) - whilst not toxic this substance can bind up other minerals making them unavailable to the body and leading to mineral deficiency. Having said that, a number of common foods such as sorrel and rhubarb contain oxalic acid and the leaves of most members of this genus are nutritious and beneficial to eat in moderate quantities. Cooking the leaves will reduce their content of oxalic acid. People with a tendency to rheumatism, arthritis, gout, kidney stones or hyperacidity should take especial caution if including this plant in their diet since it can aggravate their condition.