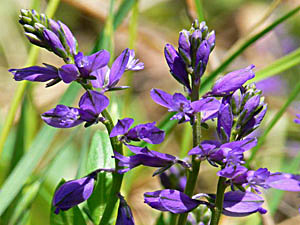 Medicinal use of Milkwort:

The bitter-tasting milkwort has a reputation for increasing milk flow in nursing mothers, but this belief is in fact unfounded. Whilst little used in modern herbalism, the root and aerial parts of the plant contain triterpenoid saponins which promote the clearing of phlegm from the bronchial tubes and so is a valuable herb for the treatment of respiratory problems such as chronic bronchitis, bronchial asthma and convulsive coughs such as whooping cough. The plant is also thought to have sweat-inducing and diuretic properties.

Grassland on heaths, dunes etc, on acidic and alkaline soils.

The leaves are used as a tea substitute. They are used to adulterate green China tea.

Seed - sow spring or autumn in a cold frame. When they are large enough to handle, prick the seedlings out into individual pots and grow them on in the greenhouse for their first winter. Plant them out into their permanent positions in late spring or early summer, after the last expected frosts. Division. Cuttings of young shoots in a frame in late spring.

Grassland on heaths, dunes etc, on acidic and alkaline soils.

Although no specific mention has been seen for this species, at least one member of this genus is said to be poisonous in large quantities.