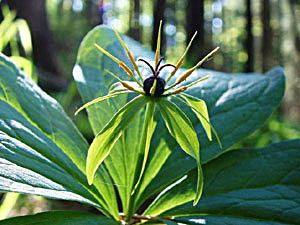 Medicinal use of Herb Paris:

The entire plant, harvested just as it is coming into flower, is antirheumatic and detergent. In large doses the herb is narcotic, producing nausea, vomiting, vertigo etc. It should be used with great caution, overdoses have proved fatal to children. In small doses it is of benefit in the treatment of bronchitis, spasmodic coughs, rheumatism, colic etc. The plant is also used in the treatment of headaches and neuralgia. The seeds and the berries have something of the nature of opium, they have been used as an aphrodisiac. A tincture of the fresh plant is useful as an antidote to poisoning by mercurial sublimate and arsenic. A cooling ointment made from the seeds and juice of the leaves is applied externally to wounds, tumours and inflammations. The juice of the berries is used to treat eye inflammations. A homeopathic remedy is made from the plant.

Other uses of Herb Paris:

Seed - best sown as soon as it is ripe in late summer in a cold frame. Sow stored seed in a cold frame as soon as it is received. The seed is very slow to germinate. It produces a primary root about 7 months after sowing, this pulls the seed deeper into the soil. Leaves are produced about 4 months later. Sow the seed thinly so that it does not need to be thinned and grow the young plants on undisturbed in a shady part of the greenhouse for their first two years of growth. Give an occasional liquid feed in the growing season to ensure the plants do not become nutrient deficient. At the end of the second year's growth prick out the young plants into individual pots and grow them on for another year or two in a shady part of the greenhouse before planting them out in the spring. Division.

The plant is poisonous in large doses. This refers to the fruit.