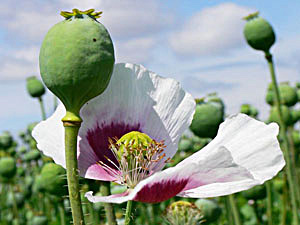 Medicinal use of Opium Poppy:

The opium poppy contains a wide range of alkaloids and has been a very valuable medicine, especially useful in bringing relief from pain. Its use (especially of the extracted alkaloids opium and morphine which it contains) can become addictive, however, and so it should be treated with extreme caution and only be used under the supervision of a qualified practitioner. The dried juice (latex) from the unripe green seed vessels is a rich source of the active alkaloids, including morphine. It is extracted by making shallow incisions in the capsules as soon as the petals have fallen. Care must be taken that the incisions do not penetrate to the interior of the seed capsules. The latex exudes from the capsules and dries in contact with the air - it is then scraped off. This latex is anodyne, antitussive, astringent, diaphoretic, emmenagogue, hypnotic, narcotic and sedative. As well as its pain-relieving properties, the latex has also been used as an antispasmodic and expectorant in treating certain kinds of coughs, whilst its astringent properties make it useful in the treatment of dysentery etc. A homeopathic remedy is made from the dried latex. This is used in the treatment of a variety of complaints, including constipation, fevers and insomnia.

Seed - raw or cooked. Much used as a flavouring in cakes, bread, fruit salads etc, it imparts a very nice nutty flavour. The crushed and sweetened seeds are used as a filling in crepes, strudels, pastries etc. Highly nutritious, the seed contains about 22.7% protein, 48% fat, 9.8% carbohydrate, 7.1% ash. It is also a good source of lecithin. The seeds are rather small, but there are large numbers of them contained in capsules 3cm or more in diameter and so they are easy to harvest and utilize. The seeds are perfectly safe to eat, containing very little if any of the narcotic principles. However, although the seeds contain no narcotic alkaloids, analysis of the urine following their ingestion may produce similar results to the analysis of the urine of morphine or heroin addicts. Edible young leaves - raw or cooked. They must be used before the flower buds have formed. In some countries they are eaten at the seedling stage. One report says that the leaves do not contain any narcotic principles. Some caution is advised, see notes at top of the page. A high quality edible drying oil is obtained from the seed. It has an almond flavour and makes a good substitute for olive oil.

The seed yields 44 - 50% of an edible drying oil. Very good for lighting, it burns for longer than most oils. The oil is also used in paints, soap making etc.

This plant contains a number of very toxic compounds, many of which are extracted and used as pain killers etc in medicine. They are also used to make various highly addictive narcotic drugs. However, in the cooler climate of Britain these compounds are not formed in sufficient quantity to make their extraction worthwhile. There are no toxins in the seeds.