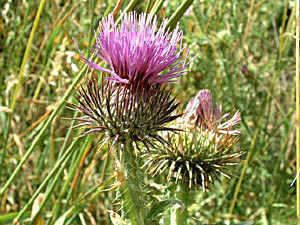 Medicinal use of Scotch Thistle:

The flowering plant is cardiotonic. It is used in some proprietary heart medicines. The juice of the plant has been used with good effect in the treatment of cancers and ulcers. A decoction of the root is astringent. It is used to diminish discharges from mucous membranes.

Flower buds - cooked. A globe artichoke substitute, though they are much smaller and very fiddly to use. Stems - cooked. Used as a vegetable, they are a cardoon (Cynara cardunculus) substitute. The stems are cooked in water like asparagus or rhubarb. They are best if the rind is removed. Leaves and young plants - cooked. They are harvested before the flowers develop and the prickles must be removed prior to cooking. The petals are an adulterant for saffron, used as a yellow food colouring and flavouring. A good quality edible oil is obtained from the seed. The seed contains about 25% oil.

The stem hairs are sometimes collected and used to stuff pillows. An oil obtained from the seed is used as a fuel for lamps.

Seed - sow spring in situ. The seed can also be sown in situ in autumn. If the seed is in short supply then it can be sown in a pot in the greenhouse in the spring. Prick out the seedlings into individual pots as soon as they are large enough to handle and plant them out into their permanent positions in early summer.