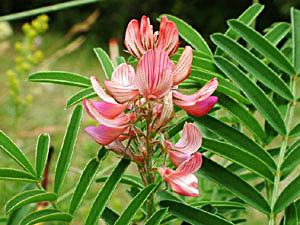 Grassland on chalk and limestone.

Other uses of Sainfoin:

A good soil conditioner for poor light soils. The plants can be grown on the land for a number of years, the deep tap roots breaking up the sub-soil and bringing up minerals from below. Plants can be cut during the growing season but care must be taken not to cut too low because the tap root tends to rise above ground level and the plant can be killed if this is cut off. The plant has an extensive root system and is useful for stabilizing soils.

Seed - pre-soak for 12 hours in warm water and sow in situ in the spring. Seed can also be sown in situ in the autumn. If seed is in short supply then it might be wiser to sow it in pots in a cold frame in early spring. Prick out the seedlings into individual pots as soon as they are large enough to handle and plant them out into their permanent positions in early summer. Division in the spring just before new growth commences. Large divisions can be planted out direct into their permanent positions. We have found that it is better to pot up the smaller divisions and grow them on in light shade in a cold frame until they are well established before planting them out in late spring or early summer.

Grassland on chalk and limestone.

Medicinal use of the herb: