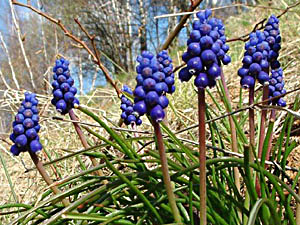 Bulb - cooked. The bulb is up to 25mm diameter. One report says that the bulb might be poisonous. The flowers, sprinkled over rhubarb, add a wonderful scented flavour.

Seed - best sown as soon as ripe in a greenhouse. The seed can also be sown in early spring in a greenhouse. A good proportion of the seed usually germinates within 2 - 3 months. Sow the seed thinly so that the seedlings can be left undisturbed in the pot for their first year of growth. Give them an occasional liquid feed in the growing season to ensure they do not become nutrient deficient. When the plants become dormant in late summer, pot up the small bulbs placing 2 - 3 bulbs in each pot. Grow them on for another one or two years in the greenhouse before planting them out when they are dormant in late summer. Division of offsets in July/August after the leaves die down. It can be done every other year if a quick increase is required. Larger bulbs can be replanted direct into their permanent positions, but it is best to pot up the smaller bulbs and grow them on in a cold frame for a year before planting them out when they are dormant in late summer.

Medicinal use of Grape Hyacinth:

The bulb is poisonous. It contains a substance called comisic acid, which is said to act like saponin. Although poisonous, saponins are poorly absorbed by the human body and so most pass through without harm. Saponins are quite bitter and can be found in many common foods such as some beans. They can be removed by carefully leaching the seed or flour in running water. Thorough cooking, and perhaps changing the cooking water once, will also normally remove most of them. However, it is not advisable to eat large quantities of food that contain saponins. Saponins are much more toxic to some creatures, such as fish, and hunting tribes have traditionally put large quantities of them in streams, lakes etc in order to stupefy or kill the fish.