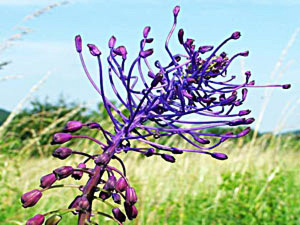 Medicinal use of Tassel Hyacinth:

The bulb is appetizer and diuretic. The bulb is rich in mucilage and can be crushed then applied as a poultice to reddened skin.

Hedgerows, edges of fields, woods and in short grass on dry soils.

Bulb - cooked. It is about 35mm in diameter. A slightly bitter taste that is appreciated by certain ethnic groups, especially Greeks and Italians. Used in spring. The cooked bulbs, preserved in oil, are used as a relish.

Seed - best sown as soon as ripe in a greenhouse. The seed can also be sown in early spring in a greenhouse. A good proportion of the seed usually germinates within 2 - 3 months. Sow the seed thinly so that the seedlings can be left undisturbed in the pot for their first year of growth. Give them an occasional liquid feed in the growing season to ensure they do not become nutrient deficient. When the plants become dormant in late summer, pot up the small bulbs placing 2 - 3 bulbs in each pot. Grow them on for another one or two years in the greenhouse before planting them out when they are dormant in late summer. If you have sufficient seed then it is worthwhile trying sowing it in situ outdoors in early spring. This is rather a hit and miss method, but a lot less work than indoor sowing. Division of offsets in July/August after the leaves die down. It can be done every other year if a quick increase is required. Larger bulbs can be replanted direct into their permanent positions, but it is best to pot up the smaller bulbs and grow them on in a cold frame for a year before planting them out when they are dormant in late summer.

Hedgerows, edges of fields, woods and in short grass on dry soils.