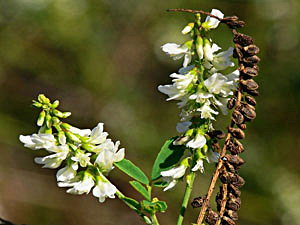 Medicinal use of White Melilot:

The whole herb, harvested when in flower, is aromatic, carminative and emollient. It was at one time widely esteemed as a medicinal herb, though it has fallen from favour in recent times. The dried leaves contain coumarin, this can be used as an anticlotting agent for the blood. The dried flowering plant has been used in ointments for external ulcers.

Fields and waste places on dry, not acid soils.

Leaves and seedpods - cooked as a "bean soup". The pea-like seeds are used as a seasoning for bean and split-pea soups. Young shoots - raw or cooked. Added to salads or used as a potherb. Only fresh shoots should be used, the dried leaves contain coumarin. Flowers - raw or cooked. Used as a vanilla-like flavouring. The dried leaves are said to be used as a vanilla flavouring but this is probably unwise, see notes at top of the page.

An oil obtained from the seed is used in paints, varnishes etc. The dried leaves smell of new-mown hay and are used as an insect repellent. The dried leaves contain a substance called coumarin, this is an anti-clotting agent and has been used as a basis of the rat killer "warfarin". The plant is a good green manure crop. It can be sown in the autumn and overwintered or sown from spring to mid summer. It can be cut several times for compost material before being finally incorporated into the soil. Fast growing, it produces a high bulk of organic material and also fixes a large quantity of atmospheric nitrogen. It can also be grown under soft and top fruit, when it will expel mice.

Seed - sow spring to mid-summer in situ. Pre-soaking the seed for 12 hours in warm water will speed up the germination process, particularly in dry weather. Germination will usually take place within 2 weeks.

Fields and waste places on dry, not acid soils.

Dried leaves can be toxic though the fresh leaves are quite safe. This is due to the presence of coumarin, the substance that gives some dried plants the smell of new mown hay. Taken internally it can prevent the blood from clotting.