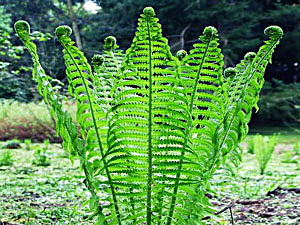 Medicinal use of Ostrich Fern:

A decoction of the leaf stalk base from sterile fronds has been taken in the treatment of back pain and also to help speed up the expulsion of the afterbirth.

Young fronds - raw or cooked. Used before they fully unroll, they are thick and succulent. Sometimes sold in speciality markets, the flavour can be compared to asparagus. Another report says that they are a famine food that is only used in times of need in China. Rootstock - peeled and roasted.

Plants make a good ground cover when spaced about 60cm apart each way. They spread slowly and the fronds tend to die off earlier in the autumn than most ferns.

Spores - surface sow as soon as they are ripe in mid-winter and keep the soil moist. It is best to keep the pot in a sealed plastic bag to hold in the moisture. Pot up small clumps of the young plants as soon as they are large enough to handle and grow on in light shade until large enough to plant out. Division during the dormant season between October and March. Larger clumps can be replanted direct into their permanent positions, though it is best to pot up smaller clumps and grow them on in a cold frame until they are rooting well. Plant them out in the spring.

Although we have found no reports of toxicity for this species, a number of ferns contain carcinogens so some caution is advisable. Many ferns also contain thiaminase, an enzyme that robs the body of its vitamin B complex. In small quantities this enzyme will do no harm to people eating an adequate diet that is rich in vitamin B, though large quantities can cause severe health problems. The enzyme is destroyed by heat or thorough drying, so cooking the plant will remove the thiaminase.