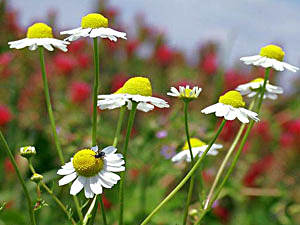 Medicinal use of German Camomile:

German camomile is a well known herbal remedy and is much used in the West. In particular it is an excellent herb for treating various digestive disorders, nervous tension and irritability and is also used externally to treat skin problems. An infusion of the flowers is taken internally as an anodyne, anti-inflammatory, antiseptic, antispasmodic, carminative, cholagogue, diaphoretic, emmenagogue, febrifuge, sedative, stomachic, tonic and vasodilator. An infusion is particularly useful as a stomachic, nervine and sedative for young children, especially when they are teething. It is also used in the treatment of irritable bowel syndrome, Crohn's disease, peptic ulcers and hiatus hernia. In large doses, or when taken regularly for several times each day, the tea can be emetic and can also cause the symptoms it is intended to cure. The flowers are also used externally to treat wounds, sunburn, burns, haemorrhoids, mastitis and leg ulcers. The flowers are harvested when fully open and are dried for later use. The flowers contain various volatile oils including proazulenes. Upon steam distillation these proazulenes produce chamazulene, this is remarkably anti-allergenic and is useful in the treatment of asthma and hay fever. The flowers are sometimes added to cosmetics as an anti-allergenic agent. The whole plant, harvested when in flower, is used to make a homeopathic remedy. It is especially suited to teething children and those who have been in a highly emotional state over a long period of time.

The young sprigs are used as a seasoning. The dried flowers are used to make herb teas. It is aromatic but with a very bitter flavour.

Seed - sow spring or autumn in situ. Germination should take place within 3 weeks.