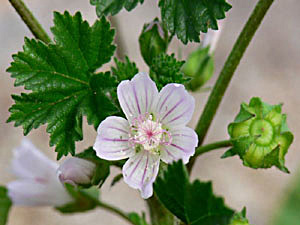 Medicinal use of Dwarf Mallow:

All parts of the plant are antiphlogistic, astringent, demulcent, diuretic, emollient, expectorant, laxative, salve. The leaves and flowers can be eaten as part of the diet, or a tea can be made from the leaves, flowers or roots. The leaves and flowers are the main part used, their demulcent properties making them valuable as a poultice for bruise, inflammations, insect bites etc, or taken internally in the treatment of respiratory system diseases or inflammation of the digestive or urinary systems. They have similar properties, but are considered to be inferior to the marsh mallow (Althaea officinalis), though they are stronger acting than the common mallow (M. sylvestris). They are seldom used internally. The plant is an excellent laxative for young children.

Leaves and young shoots - raw or cooked. A mild pleasant flavour, they are said to be highly nutritious. They can be added in quantity to salads, and make an excellent lettuce substitute, they can also be cooked as greens. The leaves are mucilaginous, when cooked in soups etc they tend to thicken it in much the same way as okra (Abelmoschatus esculenta). Some people find this mucilaginous texture unpleasant, especially if the leaves are cooked. Immature seeds - raw or cooked. A pleasant nutty flavour, they are nice as a nibble but too small for most people to want to collect in quantity. A decoction of the roots is used as an egg-white substitute for making meringue. The roots are brought to the boil in water and then simmered until the water becomes quite thick. This liquid can then be whisked in much the same way as egg whites. A tea can be made from the dried leaves.

Cream, yellow and green dyes can be obtained from the plant and the seed heads. The root is used as a toothbrush.

Seed - sow early spring or autumn in situ. Germination should take place within 2 weeks. The seed germinates in the autumn in the wild.

When grown on nitrogen rich soils (and particularly when these are inorganic), the plant tends to concentrate high levels of nitrates in its leaves. The leaves are perfectly wholesome at all other times.