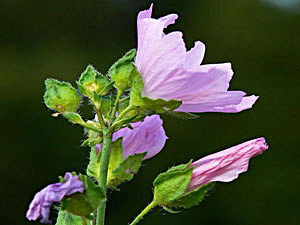 Medicinal use of Musk Mallow:

All parts of the plant are antiphlogistic, astringent, demulcent, diuretic, emollient, expectorant, laxative, salve. The leaves and flowers can be eaten as part of the diet, or a tea can be made from the leaves, flowers or roots. The leaves and flowers are the main part used, their demulcent properties making them valuable as a poultice for bruise, inflammations, insect bites etc, or taken internally in the treatment of respiratory system diseases or inflammation of the digestive or urinary systems. They have similar properties, but are considered to be inferior, to the common mallow (M. sylvestris) and the marsh mallow (Althaea officinalis) and are seldom used internally. The plant is an excellent laxative for young children.

Leaves - raw or cooked. A mild pleasant flavour. The leaves are mucilaginous and fairly bland, we use them in bulk in summer salads. They make a very good perennial substitute for lettuce in a salad, producing fresh leaves from spring until the middle of summer, or until the autumn from spring germinating plants. Flowers - raw. A very decorative addition to the salad bowl, they have a very mild flavour. Seed - raw. Best used before it is fully mature, the seed has a pleasant nutty taste but it is rather small and fiddly to harvest.

Seed - best sown in early spring in a cold frame. The seed germinates quickly and easily. Prick out the seedlings into individual pots when they are large enough to handle and plant them out in their permanent positions in the early summer. If you have sufficient seed then it can be sown outdoors in situ in the middle to late spring. Basal cuttings in late spring. Harvest the shoots with plenty of underground stem when they are about 8 - 10cm above the ground. Pot them up into individual pots and keep them in light shade in a cold frame or greenhouse until they are rooting well. Plant them out in the summer. Cuttings of side shoots, July/August in a cold frame.

When grown on nitrogen rich soils (and particularly when these are used inorganically), the plant tends to concentrate high levels of nitrates in its leaves. The leaves are perfectly wholesome at all other times.