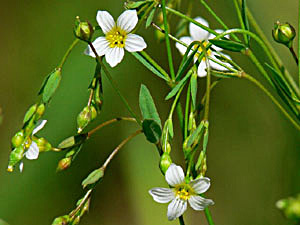 Medicinal use of Purging Flax:

Purging flax was often used in the past as a gentle laxative, and also for the treatment of muscular rheumatism, liver complaints, jaundice and catarrhal problems, though it is seldom used in modern herbalism. The whole herb is anthelmintic, diuretic, emetic and purgative. It is harvested in the summer as it comes into flower and can be dried for later use. When used as a purgative it is generally taken with a carminative such as peppermint. A homeopathic remedy is made from the plant. It is used in the treatment of bronchitis, piles and amenorrhoea.

Grassland, dunes and moors, most commonly on calcareous grassland.

Grassland, dunes and moors, most commonly on calcareous grassland.