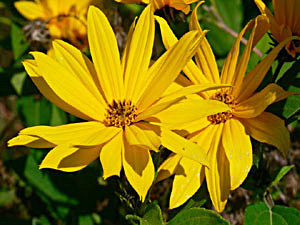 Medicinal use of Jerusalem Artichoke:

Reported to be aperient, aphrodisiac, cholagogue, diuretic, spermatogenetic, stomachic, and tonic, Jerusalem artichoke is a folk remedy for diabetes and rheumatism.

Tubers - raw or cooked. The tuber develops a pleasant sweetness during the winter, especially if subjected to frosts, and is then reasonably acceptable raw. Otherwise it is generally best cooked, and can be used in all the ways that potatoes are used. The tubers are rich in inulin, a starch which the body cannot digest, so Jerusalem artichokes provide a bulk of food without many calories. Some people are not very tolerant of inulin, it tends to ferment in their guts and can cause quite severe wind. The tubers are fairly large, up to 10cm long and 6cm in diameter. The tubers bruise easily and lose moisture rapidly so are best left in the ground and harvested as required. The inulin from the roots can be converted into fructose, a sweet substance that is safe for diabetics to use. The roasted tubers are a coffee substitute.

The plants are a good source of biomass. The tubers are used in industry to make alcohol etc. The alcohol fermented from the tubers is said to be of better quality than that from sugar beets. A fast-growing plant, Jerusalem artichokes can be grown as a temporary summer screen. Very temporary, it is July before they reach a reasonable height and by October they are dying down.

Seed - sow spring in a cold frame. When they are large enough to handle, prick the seedlings out into individual pots and grow them on in the greenhouse for their first winter. Plant them out into their permanent positions in late spring or early summer, after the last expected frosts. Division in spring or autumn. Harvest the tubers in late autumn or the winter and either replant the tubers immediately or store them in a cool but frost-free place and plant them out in early spring. Jerusalem artichoke is propagated by tubers, which should be planted as early as possible in the spring when the soil can be satisfactorily worked. Late planting usually reduces tuber yields and size seriously. Whole tubers or pieces about 50 g (2 oz.) should be planted like potatoes and covered to a depth of 10 cm. Pieces larger than 50 g do not increase the yield, though those smaller will decrease it. Deeper planting may delay emergence, weaken the sprouts, and cause the tubers to develop deeper, making harvest more difficult. Basal cuttings in spring. Harvest the shoots when they are about 10 - 15cm long with plenty of underground stem. Pot them up into individual pots and keep them in light shade in a cold frame or greenhouse until they are rooting well. Plant them out in the summer.