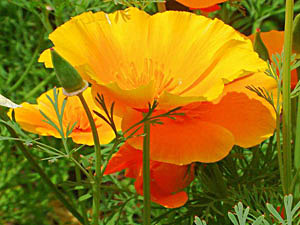 Medicinal use of Californian Poppy:

The Californian poppy is a bitter sedative herb that acts as a diuretic, relieves pain, relaxes spasms and promotes perspiration. The whole plant is harvested when in flower and dried for use in tinctures and infusions. It is taken internally in the treatment of nervous tension, anxiety, insomnia and incontinence (especially in children). The watery sap is mildly narcotic and has been used to relieve toothache. It is similar in its effect to the opium poppy (Papaver somniferum) but is much milder in its action and does not depress the central nervous system. Another report says that it has a markedly different effect upon the central nervous system, that it is not a narcotic but tends to normalize psychological function. Its gently antispasmodic, sedative and analgesic actions make it a valuable herbal medicine for treating physical and psychological problems in children. It may also prove beneficial in attempts to overcome bedwetting, difficulty in sleeping and nervous tension and anxiety. An extract of the root is used as a wash on the breasts to suppress the flow of milk in lactating females.

Leaves - cooked. This plant is in a family that contains many poisonous plants so some caution is advised in using it.

Seed - sow in mid spring or late summer to early autumn in a sunny border outdoors and only just cover the seed. Autumn sown plants may require protection from frosts in cold winters. The seed usually germinates in 2 - 3 weeks.

No records of toxicity have been seen but this species belongs to a family that contains many poisonous plants. Some caution is therefore advised.