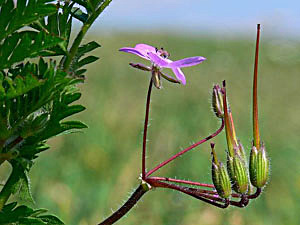 Medicinal use of Stork's Bill:

Young leaves - raw or cooked as a potherb. Harvested in the spring before the plant flowers, they are tasty and nutritious. The leaves are added to salads, sandwiches, soups etc, they can be used in recipes that call for leaves of beet, plantain, sow thistle or amaranth. Young stems - raw. Root - chewed by children as a gum.

A green dye is obtained from the whole plant. It does not require a mordant. The remnants of the styles are very hygroscopic, they can be used in hygrometers and as weather indicators. The dried plant powder has been mixed with watermelon seeds during storage and planting in order to prevent watermelon disease.

Seed - sow in situ as soon as the seed is ripe in the late summer. The seed can also be sown in situ in late spring. Germination usually takes place within 3 weeks.