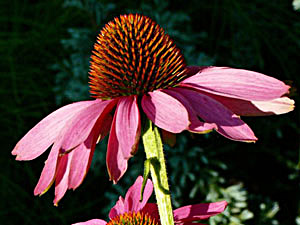 Medicinal use of Echinacea:

Echinacea is considered to be the most effective detoxicant in Western herbal medicine for the circulatory, lymphatic and respiratory systems. Its use has also been adopted by Ayurvedic medicine. Plants in this genus were probably the most frequently used of N. American Indian herbal remedies. They had a very wide range of applications and many of these uses have been confirmed by modern science. This species is the most easily cultivated of the genus and so has been more generally adopted for its medicinal uses. The plant has a general stimulatory effect on the immune system and is widely used in modern herbal treatments. In Germany over 200 pharmaceutical preparations are made from Echinacea. There has been some doubt over the ability of the body to absorb the medicinally active ingredients orally (intravenous injections being considered the only effective way to administer the plant), but recent research has demonstrated significant absorption from orally administered applications. The roots and the whole plant are considered particularly beneficial in the treatment of sores, wounds, burns etc, possessing cortisone-like and antibacterial activity. The plant was used by N. American Indians as a universal application to treat the bites and stings of all types of insects. An infusion of the plant was also used to treat snakebites. The root is adaptogen, alterative, antiseptic, aphrodisiac, depurative, diaphoretic, digestive, sialagogue. It is harvested in the autumn and dried for later use.

Leaves. No more details are given.

Seed - sow March/April in a greenhouse and only just cover the seed. Diurnal temperature fluctuations aid germination. The seed usually germinates in 10 - 21 days at 25°C. Prick out the seedlings into individual pots once they are large enough to handle and grow them on in the greenhouse for the first summer. Plant them out in the late spring or early summer of the following year and give them some protection from slugs at least until they are established. Division in spring or autumn. Larger clumps can be replanted direct into their permanent positions, though it is best to pot up smaller clumps and grow them on in a cold frame until they are rooting well. Plant them out in the spring. Root cuttings, October in a frame.