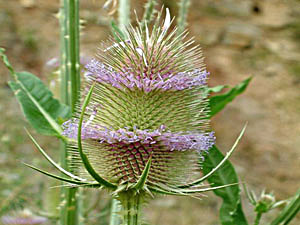 Medicinal use of Teasel:

Teasel is little used in modern herbalism, and its therapeutic effects are disputed. Traditionally it has been used to treat conditions such as warts, fistulae (abnormal passages opening through the skin) and cancerous sores. The root is diaphoretic, diuretic and stomachic. An infusion is said to strengthen the stomach, create an appetite, remove obstructions of the liver and treat jaundice. The root is harvested in early autumn and dried for later use. An infusion of the leaves has been used as a wash to treat acne. The plant has a folk history of use in the treatment of cancer, an ointment made from the roots is used to treat warts, wens and whitlows. A homeopathic remedy is made from the flowering plant. It is used in the treatment of skin diseases.

Other uses of Teasel:

A blue dye obtained from the dried plant is an indigo substitute. It is water soluble. A yellow is obtained when the plant is mixed with alum.

Seed - best sown in early spring in situ. The seed can also be sown from February to May or from August to October. All but the earlier sowings can be made outdoors.