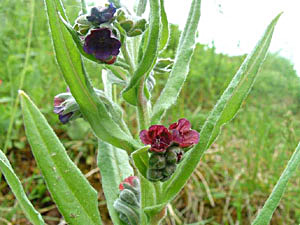 Medicinal use of Hound's Tongue:

Hound's tongue has a long history of use as a medicinal herb, though it is rarely used in modern herbalism. The leaves contain allantoin, a highly effective agent that speeds up the healing process in the body. Caution should be applied, however, since narcotic effects result from large doses taken internally and the plant is potentially carcinogenic (though it has also been used in the treatment of cancer). The leaves and roots are analgesic, antihaemorrhoidal, antispasmodic, astringent, digestive, emollient and slightly narcotic. The plant contains the alkaloids cynoglossine and consolidin, which are used medicinally to relieve pain. They depress the central nervous system and are also potentially carcinogenic. The plant has been used internally in the treatment of coughs and diarrhoea, though it is now mainly used externally as a poultice on piles, wounds, minor injuries, bites and ulcers. The root is harvested at the end of spring of the plants second year. Another report says that it is best harvested in the autumn and dried for later use. The leaves and flowering shoots are harvested as the plant comes into flower and are dried for later use. The plant has a wide antitumour reputation for cancers of various types. A homeopathic remedy is made from the roots. It is very effective in the treatment of insomnia.

Dry grassy areas and the edges of woods, often near the sea, on sand, gravel, chalk or limestone soils.

Young leaves - raw or cooked. A disagreeable odour and taste. Caution is advised, see the notes above on toxicity.

Seed - sow in situ in early summer. The seed can be sown in spring or autumn, a period of cold stratification improves germination.

Dry grassy areas and the edges of woods, often near the sea, on sand, gravel, chalk or limestone soils.

Houndstongue contains alkaloids that can cause cancer when the plant is consumed in large quantities. The plant is also said to be slightly poisonous, there are no reported cases of human poisoning but there are some cases of cattle being poisoned. The plant has a disagreeable odour and taste so is seldom eaten by animals. Contact with the plant can cause dermatitis in sensitive people.