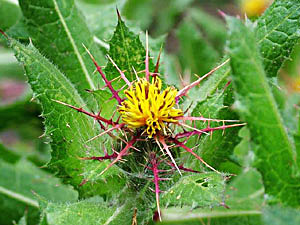 Medicinal use of Blessed Thistle:

The blessed thistle was widely cultivated in the middle ages, when it was seen as a cure-all for all manner of diseases including the plague. Although less widely used nowadays, it is still seen to have a wide range of applications though it is mainly employed as an ingredient in herbal tonics. The whole plant is astringent, bitter, cholagogue, diaphoretic, diuretic, strongly emetic in large doses, emmenagogue, galactogogue, stimulant, stomachic and tonic. A warm infusion of the plant is said to be one of the most effective means of improving the milk supply of a nursing mother. An infusion of the whole plant has also been used as a contraceptive and is often used in the treatment of liver and gall bladder problems. The plant is also used internally in the treatment of anorexia, poor appetite associated with depression, dyspepsia, flatulent colic etc. The whole plant was infused overnight in cold water and the liquid drunk three times daily in the treatment of VD. Men were required to run after each dose in order to encourage sweating. The treatment often caused nausea and vomiting - excessive doses of the plant cause vomiting. The plant is used externally in the treatment of wounds and ulcers. The plant is harvested in the summer as it comes into flower and is dried for later use. A homeopathic remedy is made from the plant. It is used in the treatment of the liver and gall bladder.

Young leaves - raw. Flower heads, harvested before the flowers open, have been used as a globe artichoke (Cynara cardunculus) substitute. The flower heads are rather small and using them in this way is very fiddly. Root - boiled as a pot herb. The herb is used as a flavouring (the part that is used is not specified).

A good quality oil is obtained from the seed. It has been used in emergencies when other oils were not available.

Seed - sow in situ in the spring or early autumn. The seed usually germinates in 2 - 6 weeks at 10°C.