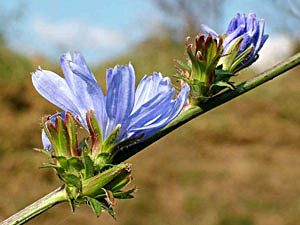 Medicinal use of Chicory:

Chicory has a long history of herbal use and is especially of great value for its tonic affect upon the liver and digestive tract. It is little used in modern herbalism, though it is often used as part of the diet. The root and the leaves are appetizer, cholagogue, depurative, digestive, diuretic, hypoglycaemic, laxative and tonic. The roots are more active medicinally. A decoction of the root has proved to be of benefit in the treatment of jaundice, liver enlargement, gout and rheumatism. A decoction of the freshly harvested plant is used for treating gravel. The root can be used fresh or dried, it is best harvested in the autumn. The leaves are harvested as the plant comes into flower and can also be dried for later use. The root extracts have experimentally produced a slower and weaker heart rate (pulse). The plant merits research for use in heart irregularities. The plant is used in Bach flower remedies - the keywords for prescribing it are "Possessiveness", "Self-love" and "Self-pity". The latex in the stems is applied to warts in order to destroy them.

Leaves - raw or cooked. The leaves are rather bitter, especially when the plants are flowering. The leaves are often blanched by excluding light, either by removing all the leaves and then earthing up the new growth, or by covering the plant with a bucket or something similar. Whilst this greatly reduces any bitterness, there is also a corresponding loss of vitamins and minerals. The blanched leaves are often used in winter salads (they are known as chicons) and are also cooked. The unblanched leaves are much less bitter in winter and make an excellent addition to salads at this time of year. A nutritional analysis of the leaves is available. Flowers - raw. An attractive addition to the salad bowl, but rather bitter. Root - cooked like parsnip. The boiled young roots form a very palatable vegetable. The root is said to be an ideal food for diabetics because of its inulin content. Inulin is a starch that cannot be digested by humans, it tends to pass straight through the digestive system and is therefore unlikely to be of use to a diabetic. However, the inulin can be used to make a sweetener that is suitable for diabetics to use. Chicory-root is free of harmful ingredients, and is essentially a concentrated combination of three sugars (pentose, levulose and dextrose) along with taraxarcine (the bitter principle of dandelion). It is especially important as source of levulose. Roots are used in seasoning soups, sauces and gravies, and to impart a rich deep colour. The roasted root is used as a caffeine-free coffee adulterant or substitute. Young roots have a slightly bitter caramel flavour when roasted, roots over 2 years old are much more bitter.

The roots have the potential to be used for the production of biomass for industrial use. They are rich in the starch "inulin" which can easily be converted to alcohol. A blue dye has been obtained from the leaves. The flowers are an alternative ingredient of "QR" herbal compost activator. This is a dried and powdered mixture of several herbs that can be added to a compost heap in order to speed up bacterial activity and thus shorten the time needed to make the compost.

Excessive and continued use may impair function of the retina.