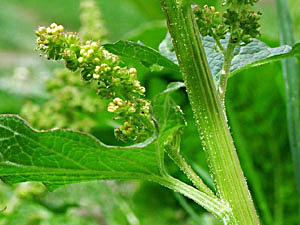 Medicinal use of Good King Henry:

The herb is emollient, laxative and vermifuge. This remedy should not be used by people suffering from kidney complaints or rheumatism. A poultice of the leaves has been used to cleanse and heal chronic sores, boils and abscesses. The seed is a gentle laxative that is suitable for children.

Young leaves - raw or cooked. The leaves wilt quickly after picking and so they need to be used as soon after harvesting as possible. They can be used as a potherb. The leaves are best in spring and early summer, the older leaves become tough and bitter. The raw leaves should only be eaten in small quantities, see the notes above on toxicity. Young leaves can be chopped and used as a small part of mixed salads, though we are not enamoured by their flavour. The cooked leaves make an acceptable spinach substitute, but are best mixed with nicer leaves. The leaves are a good source of iron. Young flowering shoots - cooked. When grown on good soil, the shoots can be as thick as a pencil. When about 12cm long, they are cut just under the ground, peeled and used like asparagus. A very pleasant spring vegetable. The plant is sometimes blanched by excluding the light in order to produce a longer and more succulent shoot, though this practice also reduces the quantity of vitamins in the shots. Young flower buds - cooked. Considered to be a gourmet food, though they are rather small and harvesting any quantity takes quite a while. Seed - ground and mixed with flour then used in making bread etc. The seed is small and fiddly but is easily harvested. It should be soaked in water overnight and thoroughly rinsed before it is used in order to remove any saponins.

Gold/green dyes can be obtained from the whole plant.

Seed - sow spring in a cold frame. Germination can be slow, but usually a high percentage will germinate. Prick out the seedlings into individual pots as soon as they are large enough to handle and plant out into their permanent positions in the summer. Division in spring. Very easy, larger clumps can be replanted direct into their permanent positions, though it is best to pot up smaller clumps and grow them on in a cold frame until they are rooting well. Plant them out in the summer or following spring.

The leaves and seeds of all members of this genus are more or less edible. However, many of the species in this genus contain saponins, though usually in quantities too small to do any harm. Although toxic, saponins are poorly absorbed by the body and most pass straight through without any problem. They are also broken down to a large extent in the cooking process. Saponins are found in many foods, such as some beans. Saponins are much more toxic to some creatures, such as fish, and hunting tribes have traditionally put large quantities of them in streams, lakes etc in order to stupefy or kill the fish. The plants also contain some oxalic acid, which in large quantities can lock up some of the nutrients in the food. However, even considering this, they are very nutritious vegetables in reasonable quantities. Cooking the plants will reduce their content of oxalic acid. People with a tendency to rheumatism, arthritis, gout, kidney stones or hyperacidity should take especial caution if including this plant in their diet since it can aggravate their condition.