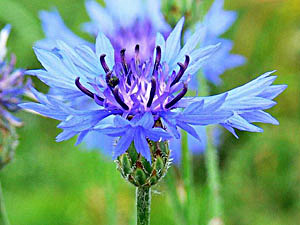 Medicinal use of Cornflower:

Cornflower has a long history of herbal use, though it is seldom employed nowadays. In France it is still used as a remedy for tired eyes, but opinions differ as to its efficacy. Traditionally it is said to work best on blue eyes, whilst Plantago major (great plantain) was used for brown eyes. The dried flowers are antipruritic, antitussive, astringent, weakly diuretic, emmenagogue, ophthalmic, very mildly purgative, and tonic. An infusion can be used in the treatment of dropsy, constipation, or as a mouthwash for ulcers and bleeding gums. This infusion is also taken as a bitter tonic and stimulant, improving the digestion and possibly supporting the liver as well as improving resistance to infections. A water distilled from the petals was formerly in repute as a remedy for weak eyes and a soothing lotion for conjunctivitis. The seeds are used as a mild laxative for children. A decoction of the leaves is antirheumatic.

Once a common weed of cornfields, as a result of modern agricultural practices it is now very rare in the wild. Found especially on porous, nutrient-rich soils.

The young shoots are edible. Flowers - raw or cooked. The fresh florets can be used in salads. They are used as a vegetable or a garnish. An edible blue dye is obtained from the flowers, used for colouring sugar and confections.

A blue ink and a dye is obtained from the petals mixed with alum-water. The dye gives a lovely colour to linen, but it is transient. The dried petals are used in pot-pourri in order to add colour. Extracts of the plant are added to hair shampoos and rinses.

Seed - sow March in the greenhouse. When they are large enough to handle, prick the seedlings out into individual pots and plant them out in May. The seed can also be sown in situ during April, whilst in areas where the winters are not too cold a sowing in situ during September will produce larger and earlier-flowering plants

Once a common weed of cornfields, as a result of modern agricultural practices it is now very rare in the wild. Found especially on porous, nutrient-rich soils.