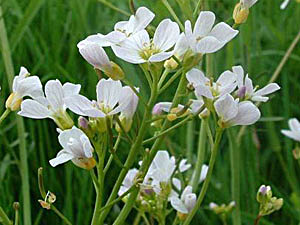 Medicinal use of Cuckoo Flower:

Cuckoo flower is seldom used in herbalism, though an infusion of the leaves has been used to treat indigestion and promote appetite. The leaves and the flowering plant are antirheumatic, antiscorbutic, antispasmodic, carminative, digestive, diuretic, stimulant. They are used internally in the treatment of chronic skin complaints, asthma and hysteria. The plant is harvested in spring and early summer and is best used when fresh.

Moist, slightly shady places in meadows and by streams, usually in acid soils.

Leaves and young shoots - raw or cooked. Rich in vitamins and minerals, especially vitamin C, but with a bitter and pungent flavour. The leaves and young shoots are harvested in the spring and taste rather like water cress. The leaves can be available early in the year and when used in small quantities make a very acceptable addition to salads. Flowers and flower buds - raw. A pungent cress-like flavour. The white flowers are very attractive, they make a pleasant nibble and also add a delicious flavour to salads.

Seed - sow outdoors in a seedbed in a shady position in April. Plant out in autumn or spring. Division in spring or autumn. The plant produces young plants at the base of its leaflets. When large enough, these can be easily separated from the main plant and grown on as individual plants.

Moist, slightly shady places in meadows and by streams, usually in acid soils.