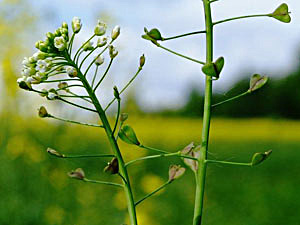 Medicinal use of Shepherd's Purse:

Shepherd's purse is little used in herbalism, though it is a commonly used domestic remedy, being especially efficacious in the treatment of both internal and external bleeding, diarrhoea etc. A tea made from the whole plant is antiscorbutic, astringent, diuretic, emmenagogue, haemostatic, hypotensive, oxytocic, stimulant, vasoconstrictor, vasodilator and vulnerary. A tea made from the dried herb is considered to be a sovereign remedy against haemorrhages of all kinds - the stomach, the lungs, the uterus and more especially the kidneys. The plant can be used fresh or dried, for drying it is harvested in the summer. The dried herb quickly loses its effectiveness and should not be stored for more than a year. Clinical trials on the effectiveness of this plant as a wound herb have been inconclusive. It appears that either it varies considerably in its effectiveness from batch to batch, or perhaps a white fungus that is often found on the plant contains the medically active properties. The plant has been ranked 7th amongst 250 potential anti-fertility plants in China. It has proven uterine-contracting properties and is traditionally used during childbirth. The plant is a folk remedy for cancer - it contains fumaric acid which has markedly reduced growth and viability of Ehrlich tumour in mice. A homeopathic remedy is made from the fresh plant. It is used in the treatment of nose bleeds and urinary calculus.

Leaves - raw or cooked. The young leaves, used before the plant comes into flower, make a fine addition to salads. The leaves are a cress and cabbage substitute, becoming peppery with age. Leaves are usually available all year round, though they can also be dried for later use. The leaves contain about 2.9% protein, 0.2% fat, 3.4% carbohydrate, 1% ash. They are rich in iron, calcium and vitamin C. A zero moisture basis analysis is available. The young flowering shoots can be eaten raw or cooked. They are rather thin and fiddly but the taste is quite acceptable. They can be available at most times of the year. Seed - raw or cooked. It can be ground into a meal and used in soups etc. It is very fiddly to harvest and utilize, the seed is very small. The seed contains 35% of a fatty oil. This oil can be extracted and is edible. The seedpods can be used as a peppery seasoning for soups and stews. The fresh or dried root is a ginger substitute.

The seed, when placed in water, attracts mosquitoes. It has a gummy substance that binds the insects mouth to the seed. The seed also releases a substance toxic to the larvae. ? kilo of seed is said to be able to kill 10 million larvae. Plants can be grown on salty or marshy land in order to reclaim it by absorbing the salt and "sweetening" the soil.

Seed - sow in situ February to May. Seed can also be sown as late as mid autumn. A common weed of disturbed ground, the plant does not normally need any help to maintain itself.