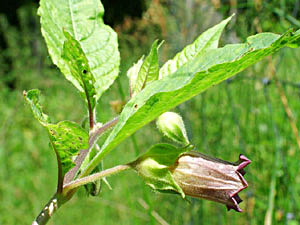 Medicinal use of Deadly Nightshade:

Although it is poisonous, deadly nightshade has a long history of medicinal use and has a wide range of applications, in particular it is used to dilate the pupils in eye operations, to relieve intestinal colic and to treat peptic ulcers. The plant can be used to treat the symptoms of Parkinson's disease, reducing tremors and rigidity whilst improving speech and mobility. It has also been used as an antidote in cases of mushroom or toadstool poisoning. This is a very poisonous plant, it should be used with extreme caution and only under the supervision of a qualified practitioner. See also the notes above on toxicity. All parts of the plant are analgesic, antidote, antispasmodic, diuretic, hallucinogenic, mydriatic, narcotic and sedative. The root is the most active part of the plant, it is harvested in the autumn and can be 1 - 3 years old, though the older roots are very large and difficult to dig up. The leaves are harvested in late spring and dried for later use. All parts of the plant contain tropane alkaloids. The leaves contain on average 0.4% active alkaloids, whilst the root contains around 0.6%. The alkaloid content also varies according to the development of the plant, being low when the plant is flowering and very high when bearing green berries. These alkaloids inhibit the parasympathetic nervous system which controls involuntary body activities. This reduces saliva, gastric, intestinal and bronchial secretions, as well as the activity of the urinary tubules, bladder and intestines. An extract of the plant has been used as eyedrops. It has the effect of dilating the pupils thus making it easier to perform eye operations. In the past women used to put the drops in their eyes in order to make them look larger and thus "more beautiful". The entire plant, harvested when coming into flower, is used to make a homeopathic remedy. This is used especially in cases where there is localised and painful inflammation that radiates heat. It is also used to treat sunstroke and painful menstruation.

Other uses of Deadly Nightshade:

This species has been found to be effective in removing PCB's from the soil and detoxifying them. The plant is more effective in doing this if it is infected with the bacterial parasite Agrobacterium tumefaciens.

Seed - best sown as soon as it is ripe in a cold frame. Germination of stored seed is slow and erratic, usually taking 1 - 6 months at 10°C. When they are large enough to handle, prick the seedlings out into individual pots and grow them on in the greenhouse for at least their first winter. Plant them out into their permanent positions in late spring or early summer, after the last expected frosts. Cuttings of softwood terminal shoots in spring. Root cuttings in winter.

The whole plant, and especially the root, is very poisonous. Even handling the plant has been known to cause problems if the person has cuts or grazes on the hand. The plant is particularly dangerous for children since the fruit looks attractive and has a sweet taste. The toxins are concentrated in the ripe fruit.