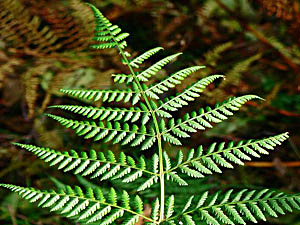 Medicinal use of Lady Fern:

A tea of the boiled stems has been used to relieve labour pains. The young unfurled fronds have been eaten to treat internal ailments such as cancer of the womb. The roots are anthelmintic and diuretic. A tea of the boiled roots has been used to treat general body pains, to stop breast pains caused by childbirth and to induce milk flow in caked breasts. The dried powdered root has been applied externally to heal sores. A liquid extract of the root is an effective anthelmintic, though it is less powerful than the male fern, Dryopteris felix-mas.

Young shoots, harvested before they have fully unfolded, can be eaten cooked. They must not be eaten raw - see the notes above on toxicity. Used in spring, they are a bitter emergency food. Rhizome - peeled and slow-baked. Reports that the root of this plant were eaten by native North American Indians are likely to be mistaken, it was probably Dryopteris expansa that was used.

Spores - surface sow in a pot of sterile compost in a shady part of the greenhouse and keep moist, this is most easily done by putting the pot in a plastic bag. Pot up small clumps of the plants when they are large enough to handle and keep them moist until they are established. Plant out in late spring of the following year. Division in spring as plants come into growth. Larger divisions can be planted straight into their permanent positions whilst smaller clumps are best potted up and kept in a cold frame until they are growing away well.

The fresh shoots contain thiaminase, an enzyme that robs the body of its vitamin B complex. In small quantities this enzyme will do no harm to people eating an adequate diet that is rich in vitamin B, though large quantities can cause severe health problems. The enzyme is destroyed by heat or thorough drying, so cooking the plant will remove the thiaminase. Although we have found no reports for this species, a number of ferns also contain carcinogens so some caution is advisable.