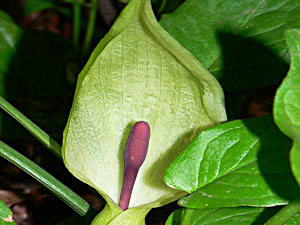 Medicinal use of Cuckoo Pint:

Cuckoo pint has been little used in herbal medicine and is generally not recommended for internal use. The shape of the flowering spadix has a distinct sexual symbolism and the plant did have a reputation as an aphrodisiac, though there is no evidence to support this. The root is diaphoretic, diuretic, expectorant, strongly purgative and vermifuge. It should be harvested in the autumn or before the leaves are produced in the spring. It can be stored fresh in a cellar in sand for up to a year or can be dried for later use. The plant should be used with caution, see notes above on toxicity. The bruised fresh plant has been applied externally in the treatment of rheumatic pain. A liquid from the boiled bark (of the stem?) has been used in the treatment of diarrhoea. A homeopathic remedy is prepared from the root and leaves. It has been used in the treatment of sore throats.

Tuber - cooked and used as a vegetable. A mild flavour, the root contains about 25% starch. A farina can be extracted from the root. Roots can be harvested at any time of the year, though they are best when the plant is dormant. At one time, the tubers of this plant were commonly harvested and used for food, but they are very rarely used nowadays. The root must be thoroughly dried or cooked before being eaten, see the notes above on toxicity. Leaves - must be well cooked. Available from late winter. Caution is advised, see the notes above on toxicity.

Starch from the root has been used as a laundry starch for stiffening clothes. Its use is said to be very harsh on the skin, producing sores and blisters on the hands of the laundresses who have to use it, though another report says that the powdered root makes a good and innocent cosmetic that can be used to remove freckles.

Seed - best sown in a greenhouse or cold frame as soon as it is ripe. The seed usually germinates in 1 - 6 months at 15°C. Stored seed should be sown in the spring in a greenhouse and can be slow to germinate, sometimes taking a year or more. A period of cold stratification might help to speed up the process. Sow the seed thinly, and allow the seedlings to grow on without disturbance for their first year, giving occasional liquid feeds to ensure that they do not become mineral deficient. When the plants are dormant in the autumn, divide up the small corms, planting 2 - 3 in each pot, and grow them on in light shade in the greenhouse for a further year, planting out when dormant in the autumn. Division of the corms in summer after flowering. Larger corms can be planted out direct into their permanent positions, though it is best to pot up the smaller corms and grow them on for a year in a cold frame before planting them out.

The plant contains calcium oxylate crystals. These cause an extremely unpleasant sensation similar to needles being stuck into the mouth and tongue if they are eaten, but they are easily neutralized by thoroughly drying or cooking the plant or by steeping it in water.