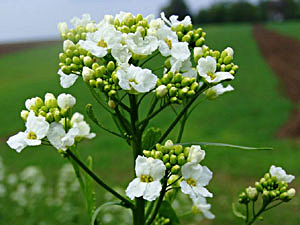 Medicinal use of Horseradish:

Horseradish is a very pungent stimulant herb that controls bacterial infections and can be used both internally and externally. The plant is a powerful stimulant, whether used internally as a spur for the digestive system or externally as a rubefacient. It should not be used internally by people with stomach ulcers or thyroid problems. The roots are antiseptic, aperient, digestive, diuretic, expectorant, rubefacient and stimulant. They should be used in their fresh state. An infusion is used in the treatment of colds, fevers and flu and is of value in the treatment of respiratory and urinary tract infections. A sandwich of the freshly grated root is a traditional remedy for hay fever. A tea made from the root is weakly diuretic, antiseptic and expectorant. The plant is antibiotic against gram-negative and gram-positive bacteria and also pathogenic fungi. It is experimentally antitumor. Externally, a poultice made from the roots is used to treat pleurisy, arthritis and infected wounds. It will also relieve the pain of chilblains. Some caution should be employed, however, because it can cause blistering.

Young root - raw or cooked. The grated root is used to make the condiment "Horseradish sauce", this has a hot mustard-like flavour. The sauce is best used uncooked or gently warmed, heating it will destroy the volatile oils that are responsible for its pungency. It is said that in Germany the roots are sliced and cooked like parsnips - rather them than me!. The root is a rich source of sulphur. Fresh roots contain the glycoside sinigrin - this is decomposed in the presence of water by the enzyme myrosin, producing mustard oil which gives the root its hot flavour. The fleshy roots can be up to 60cm long and 5cm thick. The plant is fully hardy and can be left in the ground all winter to be harvested as required. Alternatively, the roots can be harvested in early winter and stored for later use, they will retain their juicy state for some time if stored in dry sand. Young leaves - raw or cooked. A very strong flavour, though nice when added in small quantities to the salad bowl. A pleasant mild flavour according to another report. Seeds - sprouted and eaten in salads.

Horseradish tea is effective against brown rot of apples and other fungicidal diseases. The growing plant deters potato eelworm.

Seed - this is seldom produced on plants in cultivation. If seed is obtained then it is best sown in situ during the spring. Division is very easy and can be carried out at almost any time of the year, though it is probably best in spring. It s best to use sections of root about 20cm long, which can be planted out into their permanent positions in February or March, though even very small bits of root will grow away. Division should be carried out at least once every three years or the crop will deteriorate.

Large quantities of this plant can be poisonous due to its content of volatile oils.