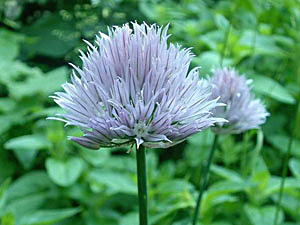 Medicinal use of Chives:

The whole plant has a beneficial effect on the digestive system and the blood circulation. It improves the appetite, is digestive, hypotensive and tonic. It has similar properties to garlic (A. sativum), but in a much milder form, and it is rarely used medicinally.

Leaves - raw, cooked or dried for later use. The leaves have a mild onion flavour and are an excellent addition to mixed salads, they can also be used as a flavouring in soups etc. The leaves are often available from late winter and can continue to produce leaves until early the following winter, especially if they are in a warm, sheltered position. A good source of sulphur and iron. A nutritional analysis is available. The bulbs are rather small, and rarely exceed 10mm in diameter. They can be harvested with the leaves still attached and be used as spring onions. They have a pleasant mild onion flavour. The flowers can be used as a garnish in salads etc. The flowers of this species are rather dry and less desirable than the flowers of many other species.

The juice of the plant is used as an insect repellent, it also has fungicidal properties and is effective against scab, mildew etc. The growing plant is said to repel insects and moles.

Seed - sow spring in a cold frame. Germination is usually free and easy, pot up the seedlings as soon as they are large enough to handle easily and plant out in the following spring. Division can be carried out at almost any time of the year but is probably best done in spring. The clumps should be divided at least every 3 or 4 years in order to maintain vigour, the divisions can be planted out direct into their permanent positions.

Although no individual reports regarding this species have been seen, there have been cases of poisoning caused by the consumption, in very large quantities and by some mammals, of certain members of this genus. Dogs seem to be particularly susceptible.