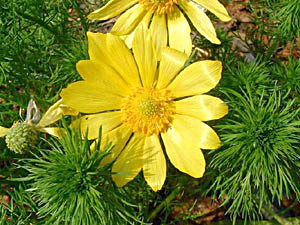 Medicinal use of Pheasant's Eye:

Pheasant's eye has a long history of medicinal use and is still retained in the Pharmacopoeias of several European countries. The plant contains cardiac glycosides similar to those found in the foxglove (Digitalis purpurea). These substances improve the heart's efficiency, increasing its output at the same time as slowing its rate. It also has a sedative action and so is generally prescribed for patients whose hearts are beating too fast or irregularly. The herb is not often prescribed, however, due to irregular absorption. The herb is cardiotonic, diuretic, sedative and vasoconstrictor. It has sometimes been used internally as a cardiotonic with success where the better known foxglove (Digitalis purpurea) has failed - especially where there is also kidney disease. The herb is also used in the treatment of low blood pressure and its strong diuretic action can be used to counter water retention. It is included in many proprietary medicines, especially since its effects are not cumulative. The plants are harvested every third year as they come into flower, they are dried for use in tinctures and liquid extracts. The herb does not store well so stocks should be replaced every year. Use with great caution, see the notes above on toxicity. The plant is used in homeopathy as a treatment for angina.

Sunny grassy hills on dry calcareous soils. A rare plant in most of its range, it has legal protection from gathering in most countries.

Seed - best sown in a cold frame as soon as it is ripe or else it can be slow and erratic to germinate. Sow the seed in partial shade in rich soil in September or March. Prick out the seedlings when they are large enough to handle and grow them on in the cold frame for their first season. Plant out when dormant in the autumn. Division in early spring or in autumn. The divisions can be difficult to establish, so it is probably best to pot them up and keep them in a cold frame or greenhouse until they are growing away well.

Sunny grassy hills on dry calcareous soils. A rare plant in most of its range, it has legal protection from gathering in most countries.

A toxic principle is present in very small quantities in the plant. It is poorly absorbed so poisoning is unlikely.