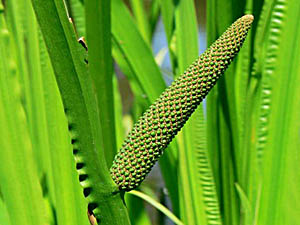 Medicinal use of Sweet Flag:

Sweet flag has a very long history of medicinal use in many herbal traditions. It is widely employed in modern herbal medicine as an aromatic stimulant and mild tonic. In Ayurveda it is highly valued as a rejuvenator for the brain and nervous system and as a remedy for digestive disorders. However, some care should be taken in its use since some forms of the plant might be carcinogenic - see the notes above on toxicity for more information. The root is anodyne, aphrodisiac, aromatic, carminative, diaphoretic, emmenagogue, expectorant, febrifuge, hallucinogenic, hypotensive, sedative, stimulant, stomachic, mildly tonic and vermifuge. It is used internally in the treatment of digestive complaints, bronchitis, sinusitis etc. It is said to have wonderfully tonic powers of stimulating and normalizing the appetite. In small doses it reduces stomach acidity whilst larger doses increase stomach secretions and it is, therefore, recommended in the treatment of anorexia nervosa. However if the dose is too large it will cause nausea and vomiting. Sweet flag is also used externally to treat skin eruptions, rheumatic pains and neuralgia. An infusion of the root can bring about an abortion whilst chewing the root alleviates toothache. It is a folk remedy for arthritis, cancer, convulsions, diarrhoea, dyspepsia, epilepsy etc. Chewing the root is said to kill the taste for tobacco. Roots 2 - 3 years old are used since older roots tend to become tough and hollow. They are harvested in late autumn or early spring and are dried for later use. The dry root loses 70% of its weight, but has an improved smell and taste. It does, however, deteriorate if stored for too long. Caution is advised on the use of this root, especially in the form of the distilled essential oil, since large doses can cause mild hallucinations. See also the notes above on toxicity. A homeopathic remedy is made from the roots. It is used in the treatment of flatulence, dyspepsia, anorexia and disorders of the gall bladder.

The rhizome is candied and made into a sweetmeat. It can be peeled and washed to remove the bitterness and then eaten raw like a fruit. It makes a palatable vegetable when roasted and can also be used as a flavouring. Rich in starch, the root contains about 1% of an essential oil that is used as a food flavouring. The root also contains a bitter glycoside. Some caution is advised, see the notes above on toxicity. The dried and powdered rhizome has a spicy flavour and is used as a substitute for ginger, cinnamon and nutmeg. A pinch of the powdered rhizome is used as a flovouring in tea. The young and tender inflorescence is often eaten by children for its sweetness. Young leaves - cooked. The fresh leaves contain 0.078% oxalic acid. The leaves can be used to flavour custards in the same way as vanilla pods. The inner portion of young stems is eaten raw. It makes a very palatable salad.

The leaves are used in basket making or woven into mats. They have also been used as a thatch for roofs. An essential oil from the rhizome is used in perfumery and as a food flavouring. The oil is contained mainly in the outer skin of the root, it has a fragrance reminiscent of patchouli oil. The fresh roots yield about 1.5 - 3.5% essential oil, dried roots about 0.8%. Some plants from Japan have yielded 5% essential oil. The essential oil is also an insect repellent and insecticide. It is effective against houseflies. When added to rice being stored in granaries it has significantly reduced loss caused by insect damage because the oil in the root has sterilized the male rice weevils. An essential oil obtained from the leaves is used in perfumery and for making aromatic vinegars. The leaves and the root have a refreshing scent of cinnamon. All parts of plant can be dried and used to repel insects or to scent linen cupboards. They can also be burnt as an incense, whilst the whole plant was formerly used as a strewing herb. The growing plant is said to repel mosquitoes.

Seed - best sown in a cold frame as soon as it is ripe. Stand the pot in about 3cm of water. Pot up young seedlings as soon as they are large enough to handle, keep them wet by standing the pots in shallow water and overwinter for the first year in a greenhouse or cold frame. Seed is rarely produced in Britain. Division in spring just before growth starts. Very easy, it can be carried out successfully at any time in the growing season and can be planted direct into its permanent positions.

The fresh root can be poisonous. When using the plant medicinally, the isolated essential oil should not be used. The essential oil in the roots of some populations of this plant contains the compound asarone. This has tranquillising and antibiotic activity, but is also potentially toxic and carcinogenic. It seems that these compounds are found in the triploid form of the species (found in Asia) whilst the diploid form (found in N. America and Siberia) is free of the compounds. However, the root (but not the isolated essential oil) has been used in India for thousands of years without reports of cancer which suggests that using the whole herb is completely safe, though more research is needed.